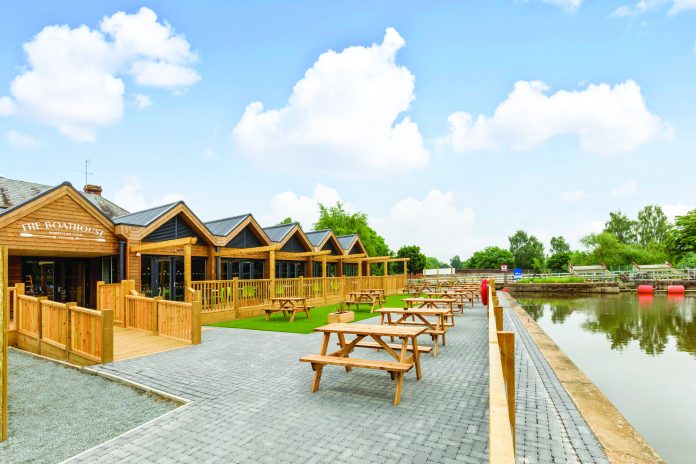 How the old Anchor Inn on the strangely-named Teapot Island was saved by a Kent brewery when they pulled out all the stops to build a fantastic new riverside restaurant, The Boathouse, on the site…
Teapot Island, on the River Medway at Yalding, is one of the quirkiest spots in Kent as it houses a café with 8,000 teapots! They include a Churchill model and one of The Queen – though we haven’t seen a Boris with a spout, yet…
And the other end of the island houses a stunning riverside restaurant which was the subject of a hugely ambitious £1.3 million redevelopment project by Faversham brewery Shepherd Neame.
It sits on the site of the old Anchor Inn, which is still there, preserved, and boasts quite a history…
Dating back to the 16th century, The Anchor was once a Temperance Hotel, and later a popular pub during the days of barge traffic in the 19th century. In the early 20th century it was the finishing point for the raft race from East Peckham, and for swimming races from Stoneham Lock.
The pub also welcomed celebrated visitors such as Victorian children’s author E Nesbit, who loved to stay there. As a result, the building has a display dedicated to her.
She wrote about The Anchor in two novels. In Salome And The Head she said: “You may stay at The Anchor, and be comfortable on the very lip of the river.” And she went on to describe breakfasting ‘in a little room whose door opens directly on that part of the garden which is adorned by two round flowerbeds edged with the thickest, greenest box you ever saw – this is next door to breakfasting in the garden itself’.
But the pub later fell into neglect and disrepair, which was a very sad sight, especially for the locals and river traffic passing by.
When Shepherd Neame bought the site they spent several months carrying out major refurbishment works and created a whole. 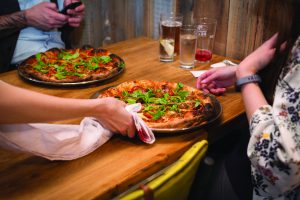 “The glass-fronted restaurant enjoys glorious views of the river”
new restaurant designed to make the most of its unique setting, while preserving the original listed Anchor building.
Occupying a truly unique location near the lock, and renamed The Boathouse to reflect its setting, the glass-fronted restaurant enjoys glorious views of the river, with a large, decked outdoor terrace for al fresco dining (if only E Nesbit could see it now!)
Inside, the beautifully airy wood interior enjoys high ceilings (much like a real boathouse) and nautically-themed décor, while a separate snug offers private dining. Both inside and outside the staff are welcoming, and in the current climate make you feel extremely safe.
The food is interesting, too. The Boathouse offers fresh, hand-stretched, stone-baked pizzas to eat in or take away, along with a menu of traditional pub classics with a contemporary twist, such as Pork & Biddenden apple sausages and mash, plus vegetarian and vegan options – all made using locally-sourced ingredients whenever possible.
On the weekend there are brunches, and with the festive season looming it’s worth looking at their new three-or-six-course Christmas menus online: Turkey, Christmas pudding, mince pies – what’s not to love?
Drinks include beer and cider, premium wines, spirits and cocktails, as well as coolers and smoothies. Plus freshly ground Eros Fairtrade coffee, also available to take away, and other beverages.
To reach The Boathouse, you drive over a tiny, hard-to-spot river bridge off Hampstead Lane (which is a beautiful riverside drive by itself), and the car park has 24 spaces. It’s also only a 10-minute walk from Yalding Station.
For customers lucky enough to arrive by water, there are a number of boat moorings, along with a custom-built kayak store.
At the time of building, the brewery’s director of retail and tenanted operations, Nigel Bunting, talked of Shepherd Neame’s ‘excitement’ at embarking on such a project, saying that it would ‘create a stunning environment in which to drink and dine’.
It certainly did – one that has proved a real boon for the lovely village of Yalding, and it is so good to see a Kent company making such an imaginative mark on the odd but much-loved Teapot Island, too. 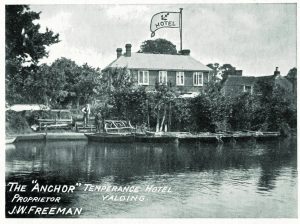 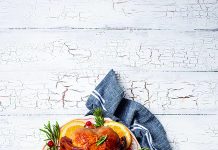 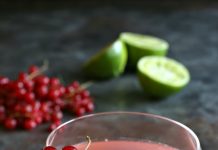 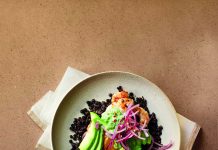