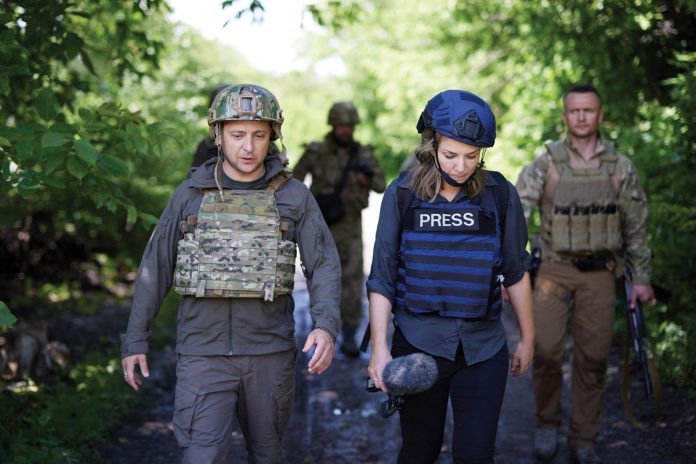 Volodymyr Zelensky’s inspirational leadership of Ukraine has seen him elevated from comedian to the world’s bravest statesman. But who is the man behind the image?

Seven years ago, Volodymyr Zelensky was cast in a role which the phrase ‘life imitates art’ was made for.

The then 37 year old was to take the lead role in the satirical Ukrainian TV drama Servant of the People. He portrayed an absent-minded high school history teacher who, during a rant about corruption in the government, is filmed by a student.

The kid puts it on YouTube and it goes viral. Zelensky’s character is elevated to unlikely political role model.

Before he knows it, the character becomes the nation’s president.

As the final series aired on Ukrainian TV, so Zelensky announced he was intending to turn fiction into fact and mount a very real bid for political power.

The party set up for him, by members of the TV production company he ran, to spearhead his bid for success at the polls? A new one. Called Servant of the People.

Positioning himself as the anti-corruption, anti-establishment leader to take the nation on, he immediately captured the hearts and minds of voters.

When the nation went to the polls in May 2019 he won by a landslide despite, and the irony will be lost on few, the incumbent president of the time warning that Zelensky was ‘pro-Russia’.

It was a remarkable rise for the confident Zelensky.

Born in central Ukraine in 1978, he grew up speaking Russian before embarking on his education, which culminated in a law degree.

But rather than legal issues, he got involved in the serious business of making people laugh. Joining a comedy team, his popularity grew and he formed the production company Kvartal 95 – the very same which registered Servant of the People for his election campaign.

He wed his school sweetheart, Olena, in 2003 when they were both 25. Aside from being the First Lady of Ukraine, she is also a successful screenwriter – writing for Kvartal 95.

The pair have a son and a daughter.

For the couple, their rise to the pinnacle of Ukrainian power was remarkable.

Then, on 24 February, Zelensky found himself leader of a nation at war – being invaded by its neighbour Russia.

Today, Zelensky, the man who rose to fame as a comedian, a man who was the voice for the Ukrainian release of the Paddington films, is one of the most famous of all the world leaders.

His bravery in the face of Russian invaders is an inspiring one. His words of defiance echoing around the world.

“He is somebody who always makes you feel like you’re trusted, like you’re about to do your best work,” the American film director David Dobson, who worked with Zelensky on a number of movies, told the BBC, “and that he believes in you to be able to bring that.

“I started out editing his movies and I ended up directing him in three films and he always made me feel like I was Steven Spielberg. He would come on to the set and look at you and you just felt completely capable.

“So it’s not surprising that he’s risen to this moment, at least not to me.”

Speaking to GQ magazine, he added: “When he was in front of the camera, he was 100 per cent in. At the same time, he was busy building one of the biggest media companies in Eastern Europe, with a whole slate of TV shows and live concerts around the world.

“How he managed to do all that and still seem so effortlessly personable, I have no idea. It’s who he is, and he seems to enjoy it.”

Ukraine was once part of the Soviet Union, and once ruled by leaders who were sympathetic to Russia, but after the union’s collapse in 1990 Ukraine gained its independence – becoming a nation sat between its former ‘parent’ and ‘the West’.

Russian President Vladimir Putin was bitterly disappointed in losing such a large land mass in the break-up of the USSR, but Zelensky was a very different animal.

He leant closer to the West – courting both the European Union and NATO, the alliance of nations established to ensure if one was attacked then the others would defend it. It was set up in a bid to avoid any sequel to the Second World War.

But Ukraine had not yet joined either organisation. Putin feared it was only a matter of time. Claiming – without any evidence – the Ukrainian government was full of ‘neo-Nazis and drug addicts’, he sent in his troops.

In the face of the invading hordes, Zelensky stood firm, addressing his nation on TV and via social media. Now he was playing the role of leader for real – and cometh the hour, cometh the man.

Ignoring an offer from the US to allow him to escape Ukraine as the tanks rolled in, he has been the very visible spearhead of the Ukrainian spirit of resistance.

Actor Sean Penn was filming a documentary about Ukraine when the invasion began. He met with Zelensky in the first days of the assault and was clearly impressed.

He said: “I don’t know if he knew he was born for this. It was clear I was in the presence of something that was new to the modern world in terms of courage, dignity and love that comes out of that man in the way he has unified that country.

“I was endlessly impressed and moved by him and terrified for him and for Ukraine.”

There is no denying that Zelensky’s very future is unclear. It may have already been decided – one way or the other – by the time you read this feature.

One thing is clear, however; Zelensky has proved to be the man of the hour. And one the people of Ukraine are rightly proud of. 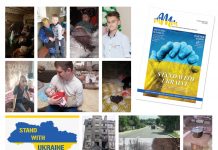 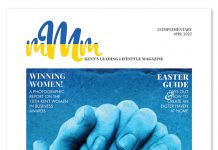 Ukraine’s Man of the Hour